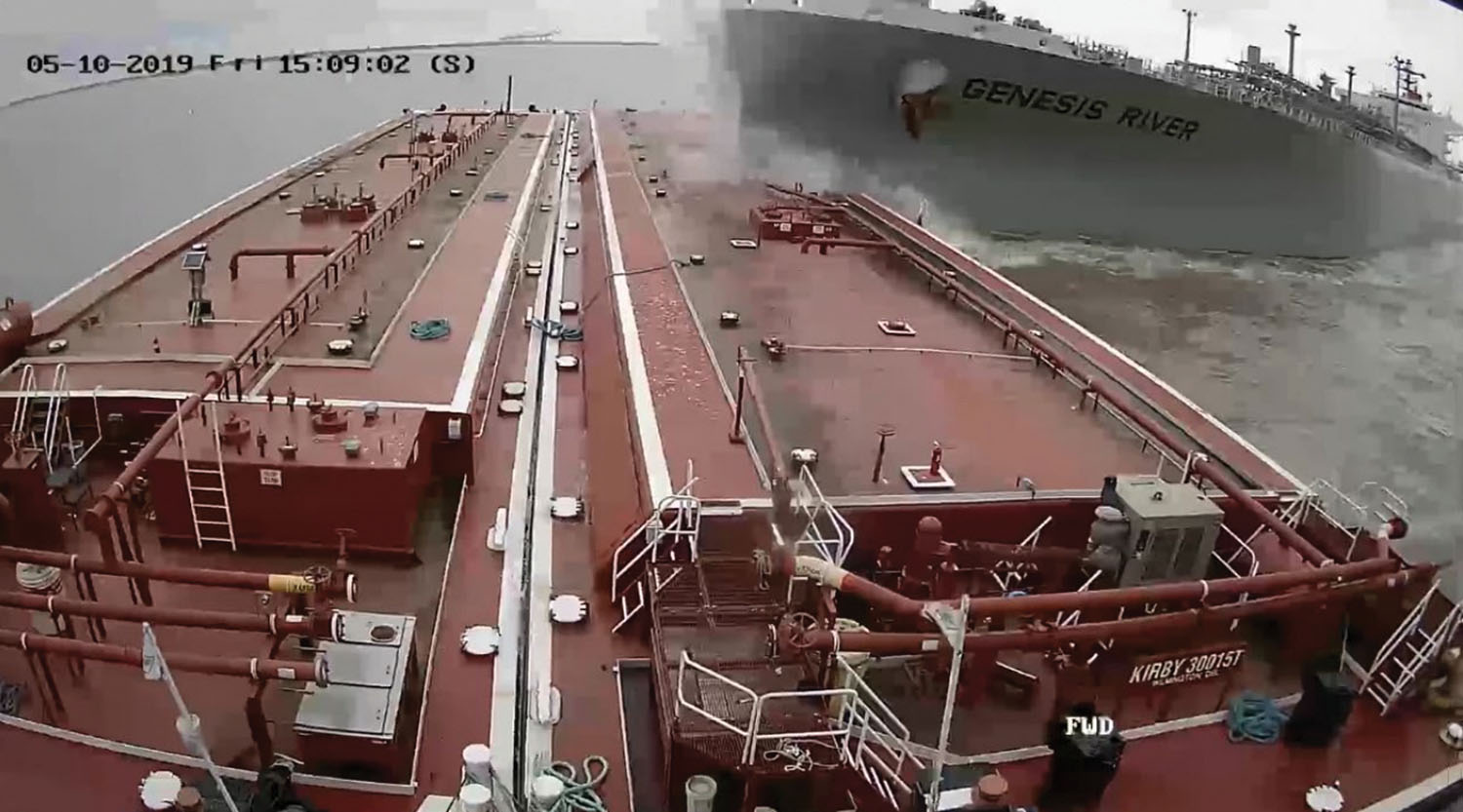 (PHOTO FROM THE NTSB REPORT)

Last month , the National Transportation Safety Board (NTSB”) issued its Marine Accident Report on the May 10, 2019, collision which occurred on the Houston Ship Channel between the M/V GENESIS RIVER and a flotilla consisting of a tank barge pushed by the M/V VOYAGER.

As the GENESIS RIVER entered the turn,  the ship suddenly unexpectedly hard to port, crossing the Houston Ship Channel and entering the “barge lane” on the eastern side of the Channel. That put the GENESIS RIVER in the path of the inbound VOYAGER flotilla, including a pair of tank barges secured side by side. The captain aboard the VOYAGER attempted a turn hard to port, but the collision at that point  was unavoidable. The GENESIS RIVER struck the VOYAGER’S  starboard barge, penetrating the hull and breaching its center cargo tanks. More than 11,000 barrels of reformate, a gasoline blending stock, escaped into the Channel.

In the cleanup that followed, the Houston Ship Channel was closed to navigation for two days, then opened without restriction May 15. Physical damage to the vessels involved totaled $3.2 million. Containment and cleanup of the reformate cost $12.3 million.

Fortunately, no one was killed or injured in the collision.

NTSB’s report includes a lengthy discussion of “Vessel Hydrodynamics”, which addresses the hydrodynamic effect the two passing tankers had on each other, which contributed to the incident. Passing vessel hydrodynamics, including “Texas Chicken”, is a well-known factor among masters in command of large ships transiting the Houston Ship Channel.

The NTSB’s “Kinematics Parameter Extraction Study” determined that, after the two tankers passed each other, other hydrodynamic forces pushed their sterns away from each other. That repulsive force on the stern created a “yawing moment”, which then “tends to turn the vessels back toward the center of the channel.” The NTSB determined that both the hydrodynamics of the pass and of bank cushion “yawed the GENESIS RIVER to port, overwhelming full starboard rudder applied to counter this port yaw. The ship continued port across the channel, where the encounter with the east bank curved the ship’s path starboard and into the VOYAGER’S barge

NTSB also addressed the GENESIS RIVER pilot’s decision to travel down the Houston Ship Channel at “sea speed,” which was about 12 knots. At that speed, the total stopping time required to bring the ship to a complete stop would have been more than seven minutes, during which the ship would have traveled a mile.  Despite that, the report concluded that dropping the ship’s anchors or initiating emergency full astern earlier “may not have prevented a collision”, given the ongoing hydrodynamic forces at work. The NTSB concluded that traveling at sea speed “through the shallow and narrow lower Houston Ship Channel left little margin for error and introduced unnecessary risk.”

Despite the efforts of both the pilots aboard the GENESIS RIVER and the VOYAGER, the ship collided with the VOYAGER’S starboard barge at 3:16 p.m., which also caused the port barge to capsize, as that barge’s facing and long wires parted. The VOYAGER then heeled over to starboard “until the last face and long wires gave way.”

Following the incident, the Voyager was towed to a Kirby facility nearby. The Genesis River went to a lay berth in Bayport.

The NTSB determined from its investigation that the probable cause of the collision was “the GENESIS RIVER pilot’s decision to transit at sea speed, out of maneuvering mode, which increased the hydrodynamic effects of the Bayport Flare’s channel banks, reduced his ability to maintain control of the vessel after meeting another deep-draft vessel, and resulted in the GENESIS RIVER sheering across the channel toward the tow.”

Following the incident, NTSB issued four new recommendations for ship operations in the Houston Ship Channel, including to:

A. avoid “any passing arrangements between wide-beam, deep-draft vessels in the northern and southern terminuses of the Bayport Flare”; and

B. avoid transiting at sea speed on the lower Houston Ship Channel.

If you or someone you love has been injured or killed, or serious property damage has occurred from a serious maritime incident, call the maritime lawyers at the Herd Law Firm to discuss your rights.