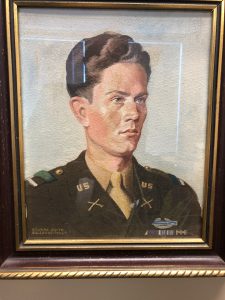 My Story begins in November, 1944, near the Ardennes Forest of Belgium.

No, I was not there, as I had not even been born yet.

But my father (for whom I am named) was there, as a young Infantry lieutenant in the 335th Infantry Regiment, 84th Infantry Division, ”Rail-Splitters”, having landed and fought east from Normandy some four months earlier.

The German Army began their final significant assault, later to be known as Battle of the Bulge (also called the Ardennes Counteroffensive) in November, 1944. The Luftwaffe began bombing American troops, to “soften them up” before the German attack, which finally came on December 16, 1944. A few weeks earlier, the Luftwaffe, flying at night, dropped fragmentation bombs on my dad’s unit. He was caught on a road in the darkness, and before he could jump into the nearest ditch, a fragmentation bomb exploded right behind him, sending shrapnel deep into his left ankle and right shoulder, and smaller bits into his back and legs. As an infantryman, he could not walk on a wounded foot and ankle, and as the platoon leader of a heavy weapons platoon consisting of mortars and machine guns, he could not maneuver and shoot those weapons with a severely damaged shoulder. So, with what he called “the perfect wounds”, he was taken off the front lines, to receive medical care and recuperate in England.

After he healed enough, Dad returned to the Front in the first few days of April, 1945. While en route, he heard over a German radio that Hitler was dead. The night before he rejoined his unit, the new lieutenant who replaced him after the bombing was killed. It was the final major battle of his regiment.

“There, but for the grace of God, go I” became his theme from then on. He felt extreme gratitude and humility. That God had spared him, even at the cost of the young officer who replaced him earlier.

My father lived with that gratitude and humility for the rest of his life, determined to help others whenever he could.

His next assignment  was as commander of a 3000-person intern camp for 6 months after the war in Europe was over. It was a detention center (where the enclosed portrait was painted, by one of the prisoners, for a pack of cigarettes.) That camp opened shortly after VE day, May 5, 1945, and my father was to operate the camp while the detainees were identified and their participation in the war was researched and confirmed, before they could be released into the citizenry or sent to other camps, for eventual trial and confinement. (Sadly, one such detainee was the wife of a SS concentration camp commander, whose hobby was “collecting tattoos” from the bodies of killed prisoners.)

After the war, my dad returned home and helped build the Greatest Generation. But his gratitude and humility, and desire to help those in great need, never left him.

And he passed that on to me.

We want to understand your needs and help you resolve your legal claims in a favorable manner.