Home/Firm Update/ACBL to pay a total of $6.6 million for 2008 oil spill
Previous Next 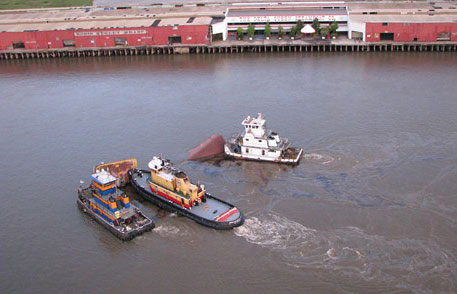 The US Department of Justice announced on Oct 4, 2021, that it has reached a tentative settlement/fine with Jeffersonville, Ind.-based American Commercial Barge Line LLC (ABCL), who tentatively agreed to acquire and preserve 649 acres of woodland wildlife habitat near New Orleans and pay over $2 million in damages related to a 2008 oil spill resulting from a tank barge in its tow, which split in two and spilled approximately 6,734 barrels (282,828 gallons) of No. 6 fuel oil into the Mississippi River upstream from New Orleans. ;. This new announcement is in addition to $1.32 million previously paid by ACBL for damage assessment and restoration planning costs, spent to resolve federal and state claims for injuries to natural resources resulting from the oil spill.

The U.S. and Louisiana concurrently filed a civil complaint against ACBL, with a proposed consent decree included. The complaint seeks damages and costs for injuries to natural resources resulting from ACBL’s July 2008. The complaint alleges that the spill resulted from a collision that occurred when the ACBL tug M/V MEL OLIVER, operated by the tug’s steersman who fell asleep at the controls, which was pushing an oil barge upriver, veered directly in front of the 600-foot M/V TINTOMARA, an oceangoing tanker ship sailing downriver. When the two vessels collided, the oil barge split in two, spilling its contents of fuel oil into the river. ACBL ultimately was found responsible for the incident, as the tugboat was managed by an unlicensed crew.

The oil spill spread more than 100 miles downriver and covered over 5,000 acres of shoreline habitat along the Mississippi River. The spill caused significant impact and injuries to aquatic habitats within the river and along its shoreline, as well as to birds and other wildlife in the area. The oil spill forced the closure of the river from River Mile Marker 98 (just upriver from New Orleans) to the Southwest Pass Sea Buoy, at the mouth of the river where it meets the Gulf of Mexico, from July 23 until July 29, 2008, halting river traffic for six days and resulting in an estimated loss of $1 billion in commerce. ACBL, the Coast Guard, and the State of Louisiana were involved in extensive response and cleanup efforts.

Under the proposed consent decree, ACBL will acquire (at an estimated purchase price of $3.25 million) and preserve 649 acres of woodland habitat, consisting of hardwood forested wetland, swamp, relic wetlands, and open waters (i.e., canals), near the Mississippi River in upper Plaquemines Parish, La.. The Woodlands Conservancy, a local nonprofit that currently manages the property for recreational and educational use, will hold title to the property, but the proposal is that a conservation servitude be added, so as to forever limit the use of the Woodlands Parcel to passive recreation, thereby protecting and preserving the ecological benefits of the property forever.

ACBL also will pay $2.07 million to compensate for natural resource damages resulting from the spill. Federal and state trustees intend to jointly use that cash payment to perform projects to restore or ameliorate the impacts to aquatic life, birds, river batture, wetlands, marshes, and recreational uses along the Mississippi River. The projects, which are described in a report called the final Damage Assessment and Restoration Plan and Environmental Assessment, Mississippi River Oil Spill, Gretna – New Orleans, July 23, 2008, include habitat restoration activities at the Woodlands Parcel and marsh creation in the Pass-a-Loutre State Wildlife Management Area, also in La. ACBL previously paid $1.32 million to reimburse the federal and state trustees for its past damage assessment and restoration planning costs, as required under OPA and OSPRA.

In total, the proposed settlement will require ACBL to pay more than $6.6 million under the Oil Pollution Act and the Louisiana Oil Spill Prevention and Response Act.

“This settlement secures full compensation for the damaged resources, including the permanent preservation of 649 acres of critical wildlife habitat along the Mississippi River just a few miles from downtown New Orleans,” said Assistant Attorney General Todd Kim for the Justice Department’s Environment and Natural Resources Division. “The restoration projects funded by this settlement will restore wildlife and wetlands, and enhance recreational opportunities for Louisiana’s residents and visitors.”

Monday’s action was filed by the Department of Justice and the Louisiana Oil Spill Coordinator’s Office, Department of Public Safety & Corrections (LOSCO) on behalf of the federal and state trustees for natural resources.

However, some environment advocates feel this penalty is too little and too late. Unlike the Oil Pollution Act (passed by Congress after the EXXON VALDES oil spill did such damage in Alaskan waters), damages awarded under the Clean Water Act are less discretionary, and start at a set fine of $1,100 per barrel spilled, barring negligence, Healthy Gulf spokesman Dustin Renaud said. Under the Clean Water Act, the settlement award would total $7.4 million, which is $800,000 more than the proposed settlement. In light of this difference, some have proposed settlement as an insufficient remedy for the damage- “This is an abysmally low settlement, and it’s 13 years late. How many spills have we seen since then?” said Renaud.

A copy of the consent decree is available on the Department of Justice website at www.justice.gov/enrd/Consent_Decrees.html.

The proposed consent decree is subject to a 30-day public comment period and court review and approval.

However, some environment advocates feel this penalty is too little and too late. Unlike the Oil Pollution Act (passed by Congress after the EXXON VALDES oil spill did such damage in Alaskan waters), damages awarded under the Clean Water Act are less discretionary, and start at a set fine of $1,100 per barrel spilled, barring negligence, Healthy Gulf spokesman Dustin Renaud said. Under the Clean Water Act, the settlement award would total $7.4 million, which is $800,000 more than the proposed settlement. In light of this difference, some have proposed settlement as an insufficient remedy for the damage- “This is an abysmally low settlement, and it’s 13 years late. How many spills have we seen since then?” said Renaud.

As a teenager, I grew up one mile south of the Ohio River, and often walked or jogged along that waterway. One mile to the north, along the Ohio, was the ACBL yard. I grew up watching tugs and tows ply the river, which increased my love of maritime commerce. (I once applied for a job at ACBL, but was turned down.) I know ACBL has had its financial troubles over the years, and wish them well. But we absolutely cannot have unskilled, untrained or overworked masters, pilots, steersmen or crewmembers working America’s waterways, especially when they are pushing or carrying dangerous cargos. I hope ACBL and other towboat operators will learn from these mistakes, and redouble their efforts to be sure their vessels and crew are safe and skilled.

We at the Herd Law Firm have represented officers, crew, seamen, mariners of all sorts, and even passengers, who were hurt or became ill due to conditions arising aboard commercial vessels and ships. We would be pleased to speak with you if you have such claims to discuss.