American Maritime Heroes are recognized for their “courage, outstanding achievements, or noble qualities that have added to the rich history of America as a maritime nation.” While these heroes come from a variety of backgrounds, they share a common impact in making a positive difference in the still-unfolding history of American maritime.

Hanks, now 64 years old, has earned his honor through his insight towards a number of notable maritime based films. Hanks drew global attention to the bravery and service of maritime seamen during his role in the film “Captain Phillips,” through this narration in the documentary “Boatlift – An Untold Tale of 9/11 Resilience,” and his starring and screenplay writing in the just-released “Greyhound”. “Greyhound” brings to life the fictional story of Medal of Honor recipient and Naval Commander Ernest Krause’s first command mission, leading a convoy of 37 merchant marine ships across the North Atlantic during World War II while avoiding the pursuit of German U-Boats operating in their deadly “wolf pack” maneuvers.

President of the AMP Mike Roberts praised Tom Hanks’ work throughout his career, noting that Hanks reflects a deep respect for those who serve. “This includes American mariners responding to the 9/11 attacks in New York, dealing with piracy off the coast of Somalia, and keeping our allies supplied during World War II. We are grateful for his work and passion in telling the stories of these unsung maritime heroes.” 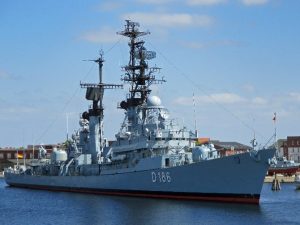 Today, approximately 2,000 World War II merchant maritime heroes remain, though their work lives on through the vast effort of all merchant mariners in the 21st century and beyond.

And if you have not seen “Greyhound” yet, you surely will want to!