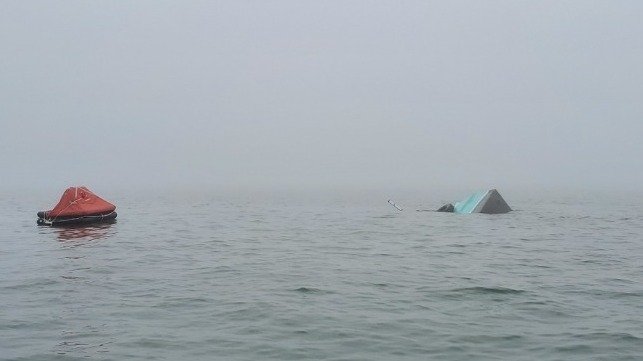 Last year there was a fatal collision between the product tanker BOW FORTUNE and the fishing vessel PAPPY’S PRIDE, offshore Galveston, Texas. As is typical in such cases, an investigation was conducted by the National Transportation Safety Board (NTSB), and the NTSB released its report earlier this month. The agency concluded that the captain of the PAPPY’S PRIDE failed to respond to warning signals and VHF calls made by the BOW FORTUNE.

Several attempts at evasive maneuvers by the BOW FORTUNE were made, as well as several attempts at hailing the fishing vessel. However, those efforts proved unsuccessful, and at 3:37 PM, PAPPY’S PRIDE was still on a collision course. The Tanker’s pilot hailed the fisherman on very high frequency radio (VHF) a third time and ordered all stop, but the tanker’s bow collided with the fishing vessel a few seconds later, causing PAPPY’s PRIDE to capsize and sink, killing three crewmembers.

The NTSB investigation found that, although the PAPPY’S PRIDE had instruments on board to avoid collision (including a functioning VHF radio, an automatic radar plotting aid (ARPA), automatic identification system (AIS) and electronic chart system), she still did not respond to any of the BOW FORTUNE’S hails.

“It is possible the captain [of PAPPY’S PRIDE] was away from the conn, was distracted, fell asleep, was unsure of what action to take, or was otherwise unable to respond to the developing situation,” NTSB concluded. “Communication, especially in limited visibility, is a vital part of standing an effective watch. In addition, the PAPPY’S PRIDE’S outbound course created a close quarters situation that resulted in the collision.”

NTSB also noted the fishing vessel’s failure to respond also could have been medically related, as her captain had suffered a stroke three weeks before the collision and had been hospitalized for three days before being discharged.

The NTSB Report can be found here:
https://www.ntsb.gov/investigations/Pages/DCA20FM011.aspx

We at the Herd Law Firm grieve and pray for the families of these lost mariners, both captain and crew. We encourage all watch-standers to be vigilant in their duties, and to not become distracted by other operations that may be occurring on their vessels.