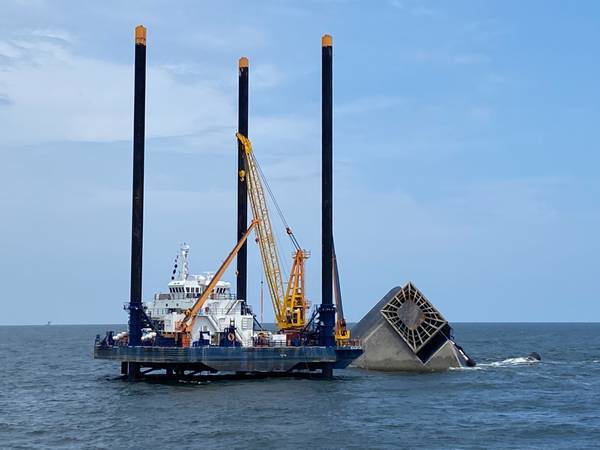 (Photo: Brendan Freeman / U.S. Coast Guard)
The SEACOR EAGLE is staged with hoisting gear alongside the SEACOR POWER wrecked liftboat, located offshore Port Fourchon, La. The EAGLE is being used as the stable platform to assist in salvage of the SEACOR POWER and related pollution response operations.

This coming Monday, August 2, the U.S. Coast Guard will hold a formal public hearing to consider evidence related to the April 2021 capsizing of the SEACOR POWER liftboat, which led to the death of 13 of its 19 crewmembers in the Gulf of Mexico offshore Port Fouchon, LA.

The SEACOR POWER capsized on April 13, 2021, about seven miles south of Port Fourchon.

Shortly after the sinking, six crewmembers were rescued; another six bodies were recovered but found unresponsive.

Coast Guard boat and aircrews, local agencies, and Good Samaritans searched for the 19 crewmembers for a total of 175 hours, covering an area of over 9,200 square nautical miles, before suspending the search for the remaining seven crewmembers on April 19.

The hearing on Monday is expected to hear evidence related to the fatal incident. It will take place at the Courtyard Marriott Hotel in Houma, La. The hearing is open to the public, but also will be available online t the following link: https://livestream.com/uscginvestigations. As is usual, the hearing also will be recorded, with the recordings made available later for public access.

The hearing is scheduled to convene daily at 8 a.m. Central Daylight Time on weekdays, August 2 through August 13.

We already know that deteriorating weather was a major factor in the sinking. Questions remain who knew, or should have monitored, the weather, and who should have postponed the voyage or earlier ordered responsive repositioning of the vessel.

The National Transportation Safety Board (NTSB) is the leading agency in the SEACOR POWER investigation. NTSB officials will participate along with USCG representatives, but NTSB is expected to produce an independent report reflecting its own findings.

In May, NTSB published a preliminary report as part of its ongoing investigation into the fatal capsizing. According to its initial report, the vessel departed Port Fourchon at about 1330 hours (1:30 p.m.) on April 13, bound for Main Pass Block 138 offshore LA. A weather report emailed to the vessel at 0702 that morning predicted afternoon winds of 9 to 12 knots from the southeast, with 3-foot seas. NTSB investigators learned that at about 1330 hours (3:30 p.m.), as the SEACOR POWER departed Port Fourchon and entered the open waters of the Gulf, a squall passed over the lifeboat. During the squall, visibility dropped and winds suddenly increased, so the vessel’s crew decided to lower the vessel’s to the seafloor, in order to hold the vessel stationary and in position until the storm passed. The vessel’s helmsman attempted to turn the liftboat “into the wind” as the legs began to descend. However, before the turn could be completed, the liftboat suddenly heeled to starboard and capsized.

Several crewmembers were able to escape onto the exposed, port side of the liftboat’s deckhouse. However, continuing high winds and seas that had built to 10 to 12 feet prevented rescuers from reaching the liftboat. Some crewmembers were washed overboard; of those, eventually six were rescued, one of whom sustained a serious injury.

NTSB investigators previously interviewed survivors, other personnel who previously has crewed the vessel, plus representatives for the owner and charterer, along with vessel inspectors and surveyors, and fact witnesses including search and rescue responders.

Earlier in July commercial salvors raised the bow section of the liftboat. The Donjon-SMIT salvage team lifted the bow section to the surface of the water and transported it by barge to the Modern American Recycling Services, Inc. (M.A.R.S.) facility in Houma, La.

The remainder of the vessel is in the process of being salvaged now. Once she is salvaged, NTSB investigators intend to return to inspect the vessel and collect further evidence.

This is just the most recent example of how tragedy can result when weather-sensitive vessels try to operate in stormy weather conditions.

We at the Herd Law Firm have handled maritime casualties like this for over 30 years. We are proud to represent crewmembers and seamen, the “men who go down to the sea in ships.” (Psalm 107)

Our thoughts and prayers are with these brave seamen and their families.