Cruise ships, as large-scale commercial and recreational vessels, require precise navigation and supervision in order to operate safely. However, the size of such ships can make coordinating the communication between vessel and pilot quite a challenge; any failures of communication can easily result in major accidents and damage.

A report released earlier this month by the National Transportation Safety Board (NTSB) regarding the allision of the cruise ship Norwegian Epic with the mooring dolphins in San Juan Cruise Port, Puerto Rico, is an example of one such unfortunate incident.

The NTSB report determined that the probable cause of the incident was a lack of communication and coordination between the ship’s master and the harbor pilot, which resulted in a dangerous and poorly executed docking maneuver. According to both the master and pilot, they discussed the docking maneuver, which included the use of two tugs, during their initial master/pilot exchange. However, although the master and the pilot discussed the use of tugs, they did not discuss how the tugs would be controlled or who would control them. The master was heard giving only one verbal order regarding the tugs, and at times, the tugboats and thrusters were operating in opposition to each other’s maneuvers. Complicating matters, the vessel had an inoperable port shaft (propeller) at the time.

Additionally, much of the communication between the master, pilot and tugs was either in Spanish or in hand gestures, rather than standard English verbal commands, which are required. “Perhaps this could have worked if the master and pilot had agreed upon this method, but this was the first time they had worked together, and they had not previously agreed to this method of communicating tug orders,” stated the NTSB.

Fortunately, none of the 6,023 passengers on board was injured. But ship’s personnel and passengers may not be so lucky next time. 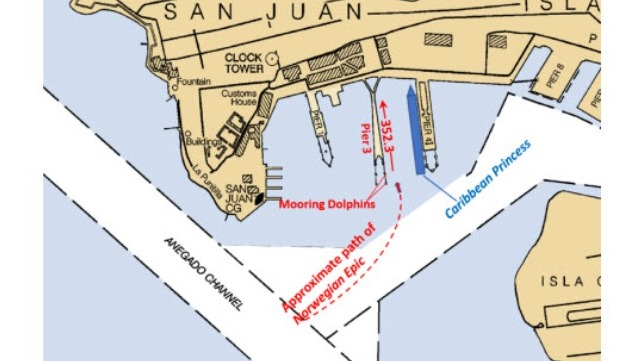