On April 20, 2010, the Deepwater Horizon oil rig was drilling 40 miles off the coast of Louisiana when a sudden and massive burst of natural gas (described by an executive later as like a “550-ton freight train” ) shot up from a drilling pipe to the surface of the Gulf of Mexico. The gas quickly ignited; the resulting explosion killed eleven and injured 17 others. The 400-ton blowout preventer that was supposed to seal off the well also failed, allowing 3.2 million barrels of crude to start flowing unabated into the Gulf.

BP’s attempts to kill the well from the surface, through underwater robots and a containment dome placed on the sea floor, failed. The next option was to begin drilling a relief well that would take months to complete. Meanwhile, the world watched some of the largest and richest companies in the world- the British oil major BP, Swiss drilling contractor Transocean and Houston oi field services company Halliburton- struggle to bring the damaged well under control. Even ten years later, the tragedy still lingers, not only over the lives of the families whose men were lost and whose businesses were ruined, but an industry whose reputation was forever damaged.

Investigations have revealed that the events leading up to the explosion that April night began years earlier. As shallower and easier to access oil and gas deposits are exhausted, many drilling companies have pushed further out, into deeper areas of the gulf. Macondo, as BP dubbed the well, was not only located a mile underwater, but also stretched another 3 1/2 miles beneath the sea floor. At this depth, the weight of the overlying rock puts incredible pressure on the oil and gas deposits below. Managing that amount of pressure is difficult and dangerous, a highly technical process honed over decades, but according to a report by a federal commission assembled by former president Barack Obama after the explosion, the companies drilling the well made repeated negligent errors that made the explosion all but inevitable.

“There are recurring themes of missed warning signals, failure to share information, and a general lack of appreciation for the risks involved,” said the report. “Though it is tempting to single out one crucial misstep or point the finger at one bad actor as the cause of the Deepwater Horizon explosion, any such explanation provides a dangerously incomplete picture of what happened.”

The oil sector prides itself on its technological acumen and scientific approach to managing risk. However, after the explosion, information came to light that would challenge public confidence in  offshore oil companies. At the time of the explosion, the Macondo well was six weeks behind schedule and $58 million over budget, already nicknamed by the Deepwater Horizon crew as“the well from hell”. Federal investigators also found that BP and Halliburton, which provided engineering services on the drilling operation, potentially failed to adequately pressure test the cement they were pumping down the well.

When the Deepwater Horizon crew tested the strength of the well around 5 p.m. on the day of the blowout, they encountered unexpected pressure. Crew on-site noted this, but decided to abandon that testing method in favor of one that produced the result they were looking for. This alternate method of testing the cement failed to show how the bottom of the well was cracking, allowing highly pressurized natural gas into the well. When the crew began pumping seawater down the well to shut it down, they unknowingly set off a chain reaction that would take the lives of 11 the 126 men onboard. 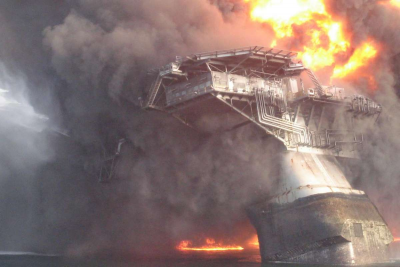 For the oil industry, the Deepwater Horizon explosion represented perhaps the largest public relations crisis in its history. The Deepwater Horizon incident was not only a much larger oil spill than that of the infamous Exxon Valdez two decades ago, but one that threatened some of the nation’s most popular tourist areas and fishing grounds. In response, the Obama administration ordered a moratorium on deep water drilling and set government regulators in motion to overhaul federal rules governing oil and gas operations in the Gulf, which began to be implemented the following year. Previous plans to expand offshore drilling along the Florida Gulf Coast and the Atlantic seaboard also were abandoned. 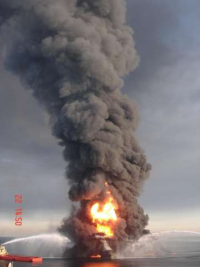 Now, a decade later, the consequences of Deepwater Horizon still linger, and  not just for the families of those lost or the oil industry, but the Gulf itself. A report by the National Wildlife Federation in 2018 found that many marine species, such as bottlenose dolphins and laughing gulls, were still suffering the effects of the oil spill. A study by scientists at the University of Miami earlier this year found that toxins related to the oil spill traveled much further through the Gulf than previously understood, suggesting scientists still have a long way to go to understand the full environmental consequences of Deepwater Horizon.